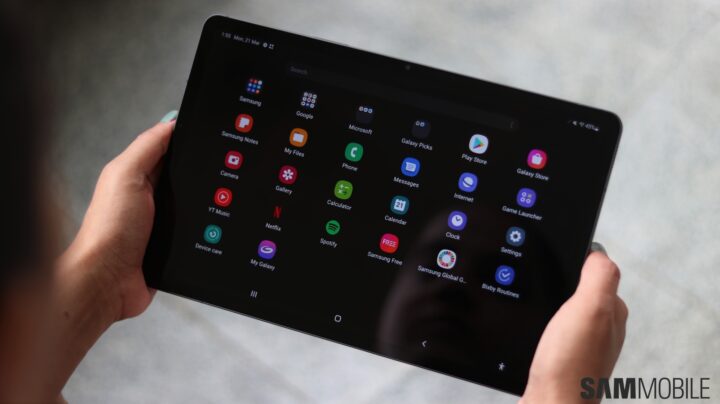 SamMobile has affiliate and sponsored partnerships. If you purchase something through one of these links, we may earn a commission.

Samsung is the best Android tablet maker, but the sad fact is that despite the powerful hardware, Android tablets lag huge behind Apple iPads in terms of market share. Google, Android developers, and hardware makers don’t seem to have fully cracked the tablet’s code, but Android 12L could steer things in the right direction.

Android 12L was designed for large-screen devices like tablets and some foldable phones. Emphasis is placed on multi-window features and other user interface enhancements that benefit multitasking and productivity. Curiously, the update was released last month for Google’s Pixel phones and hasn’t made its way to any Galaxy tablets.

Samsung improves the Android tablet experience in other, but similar, ways. It has a UI on its side, and most tablets can take full advantage of the desktop-like DeX environment. The company’s own interpretation of a multi-window, user-friendly Android 12 (without “L”) UI on the Galaxy Tab S8 series is quite good.

So it looks like an Android 12L update for the Galaxy tablets isn’t currently on Samsung’s top priority list. Or at least there’s no sign of an imminent release for Android 12L on Galaxy tablets. The company doesn’t need Android 12L to create a tablet-friendly UI, so why bother?

Well, the main problem that has always plagued the Android tablet experience – and yes, that includes the Galaxy tablet lineup – is poor third-party app support for large-screen devices. This is another big fix that Android 12L is supposed to bring, according to Google. The L-branded operating system should enable app developers to make user interfaces responsive to a wide range of screen sizes, device orientations, and other device states.

Given these benefits, I wish Samsung had played a role in the development of Android 12L, and in my opinion, it’s odd that a Samsung-Google collaboration didn’t happen.

Android 12L may have needed both Samsung and Google

Google doesn’t have a hardware platform for its own tablet-focused Android 12L update, which is likely why the OS debuted on the Pixel series of smartphones. Meanwhile, the mighty Galaxy Tab S8 series of tablets pushes hardware and build quality to new heights, but suffers from the same old problem: poor support from app developers.

You’d think that Samsung and Google would make great allies in the development of Android 12L, but Samsung didn’t participate in the beta, and no Galaxy tablets are running this version of the OS at the time of writing. .

Samsung and Google even worked closely together to develop Wear OS 3 for smartwatches. The Galaxy Watch 4 was the first smartwatch series to run Wear OS 3 at the expense of Tizen. And Samsung made this trade specifically to get better app support.

I find it strange that Samsung and Google haven’t joined forces and worked together (or more closely) on Android 12L, given the Korean tech giant’s fantastic hardware in the tablet department and the lack of a tablet Android in Google’s product line.

Thankfully, Android 13 is supposed to include all the goodies of Android 12L, which means Samsung’s tablets should eventually get those features and, dare we hope, better app support.

Nevertheless, it looks like a missed opportunity for Samsung and Google. Android 12L squanders on Pixel phones, while the Galaxy Tab S8 Ultra is the most powerful tablet ever. It’s also not like the usual annual incremental upgrade. This is actually Samsung’s first “Ultra” tablet and theoretically competes with the iPad Pro 12.9.

Hopefully Android 13 will change the Galaxy tablet experience for the better, even though Samsung didn’t participate in Android 12L.