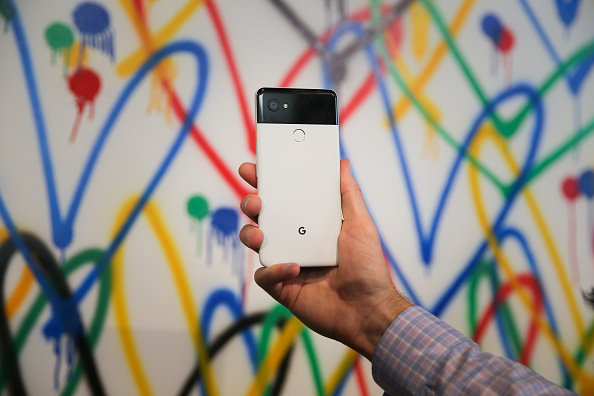 Google’s Android is now focused on a Pixel update that aims to fix an issue on devices regarding its wireless charging, with a bug affecting service for anyone using the feature. The featured update also focuses on security vulnerabilities in Google’s Pixel devices, giving everyone the chance to get more for their update.

(Photo: ELIJAH NOUVELAGE/AFP via Getty Images)
The new Google Pixel 2 XL smartphone is shown during a product launch event, October 4, 2017, at the SFJAZZ Center in San Francisco, California. Google unveiled newly designed versions of its Pixel smartphone on Wednesday, the culmination of a lineup of refreshed devices that are part of the tech giant’s effort to bolster its presence against hardware rivals.

The wireless charging issues focus on other non-smartphone related services that affect the device, especially with a green screen appearance on the camera preview. Another of its issues focuses on zooming its front camera with the use of certain apps and this can prove to be a nuisance for the users of the service.

Google brings a security patch to the latest Pixel update

However, that’s not all Pixel has to offer on this latest patch as an Android bulletin has released a separate sheet which talks about the fixes to the gadget. The security bulletin detailed the many bugs and issues that may focus on vulnerabilities in the device, focusing on the many issues plaguing Pixel phones and future threats to its software.

Google’s Pixel is bringing massive features to the company, and it’s focusing on the many offerings Android has made for the smartphone, getting those services faster compared to other devices. One of the latest Pixel updates uses the Google Messages and Call feature which can turn text to speech during a voice call, allowing the other person to hear the sender even if they’re not speaking at the microphone.

There are also other Android features now that Pixel got first, and there are other updates that Pixel devices got exclusively thanks to Google. One Pixel-specific update is the Emergency Call feature which gives everyone the ability to avoid a bug experience while using the service, especially when needed.

Google Pixel is one of the most influential phones on the market today, and it’s not because of its features and flashy design, but because it holds an operating system and a important company behind him. Its features coming straight from the Google and Android development team are a huge factor that boosts its reliability and improvement, especially with updates like these.