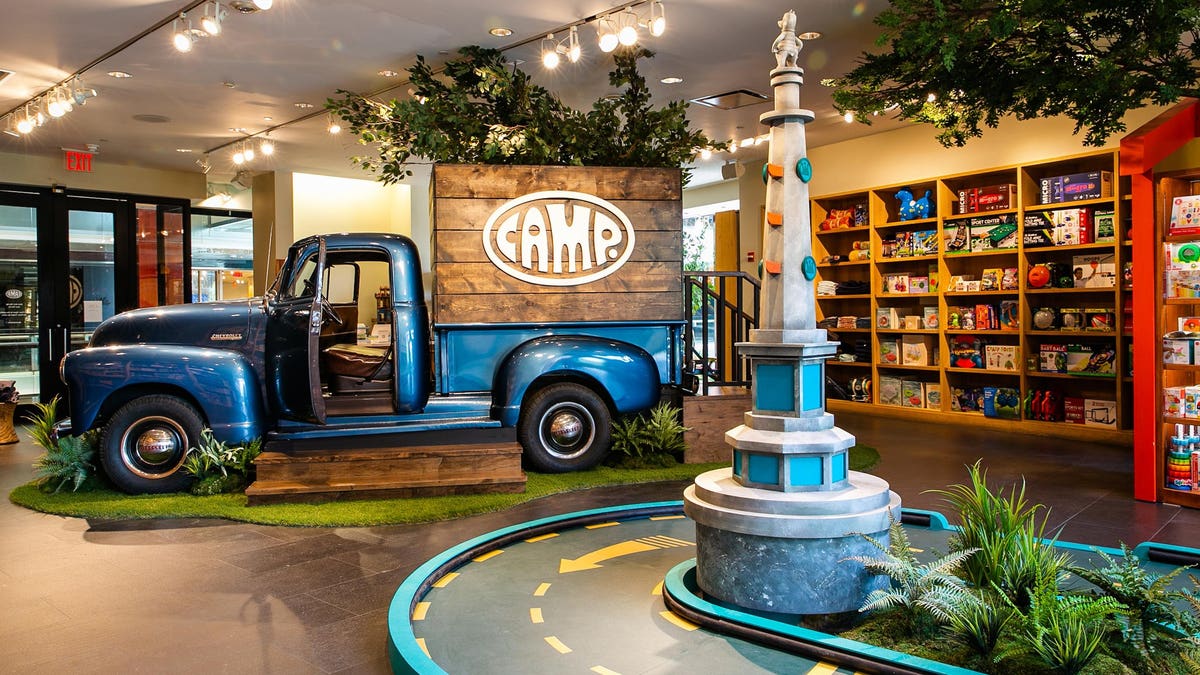 Camp, the company that is reinventing toy retailing, continues to expand, with a new store in one of the East Coast’s largest malls.

The new location at a large-scale shopping center – Westfield Garden State Plaza in Paramus, NJ – could play a key role in accelerating Camp’s expansion to other parts of the country.

The store opens to the public on October 19.

The 6,500 square foot space will be one of Camp’s new formats, a more commercial and less experiential store, compared to the Camp flagship store on Fifth Avenue. But it will always contain many hands-on activities that have made the Camp a hit with parents and children and fueled its rapid growth.

Camp takes the site from a previous failed experiment in toy retailing – one of the reimagined next-gen Toys R Us stores. The company that owns the rights to the Toys R Us name opened two stores – one at Garden State Plaza and one at The Galleria in Houston – in fall 2019.

These stores were envisioned as the start of a Toys R Us revival in this country. They were closed for good at the start of this year, although the new owner of the Toys R Us brand is promising an eventual return to retail stores.

The Paramus store, said Ben Kaufman, co-founder and CEO of Camp, will be similar to the company’s store in Hudson Yards in New York City. The Paramus store will not have a “magic door” that turns to reveal a play space or seasonally changing themes, but if the Paramus location is successful, it could be converted to a full-size format in the future. .

“We hope that’s what’s going on here, that it’s kind of a test to a bigger space in this place,” Kaufman said.

The Paramus store has a treehouse and slide in the center of the space, and a vintage van in the entryway for kids to play on. “There will be experiences throughout, with play built into all shopping moments,” Kaufman said, but unlike flagship stores, there won’t be any rotating themed experiences like Travel Camp, Cooking Camp or Cosmic Camp.

The Westfield Garden State Plaza location is Camp’s seventh store, and two additional stores, one in Los Angeles and one in New England, are expected to open before the end of the year.

When the pandemic struck, Camp proved to be the perfect toy store for the digital age, rapidly rotating to offer virtual birthday parties, downloadable activity books, and virtual treasure hunts. He also created Secret Santa-style online gift exchanges and a kid-friendly app that allows children to purchase gifts for themselves or their family members with a spending limit set by their parents.

He has organized over 50,000 virtual birthdays and his activity books have been downloaded over 500,000 times.

From the start, Kaufman, former director of marketing at Buzzfeed, and Camp have been particularly savvy about brand partnerships.

Last summer he joined Walmart
to create CAMP by Walmart – a virtual summer camp with over 100 videos featuring arts and crafts, fitness and other camp activities with famous counselors such as LeBron James, Drew Barrymore and Neil Patrick Harris,

For brands, sponsorship of themed activities in Camp stores, such as a gardening activity sponsored by Scott’s Miracle Gro
, puts them in contact with consumer parents while entertaining their children.

For Halloween, Garden State Plaza Camp and other camp sites are teaming up with Ferrara, which owns candy brands like Brach’s, Nerds, and Sweetarts, to deliver online games and in-store events.

Camp executives prefer to describe the business as a “family experiences” business or a “retail media business” rather than a toy store. In the original New York City store, paid activities usually generate the bulk of the revenue.

The location of the Garden State Plaza is better suited for repeat family visits than an experiential mega-mall like the American Dream Mall, also in northern New Jersey, Kaufman said. “We like to be in centers where we are the right thing to do,” Kaufman. “I don’t really want to compete with seven other amusement parks.”

Kaufman was also impressed with the heavy traffic in the Plaza. The camp team visited the mall on a Tuesday in April 2021 and were surprised to see how busy it was despite the pandemic. “I’ve never seen so many people,” Kaufman said. “It wasn’t just packed with people, it was packed with people with shopping bags.”

Additionally, Camp board member Michael Goldstein had touted Paramus as a prime location for a store. Goldstein, CEO and Chairman of the Board of Toys R Us in the 1990s, often reminded Camp executives that Paramus was the top-selling location for Toys R Us.

“Camp is one of those tenants we’re looking for – experiential, family, fun. It just clicks a lot of categories for us, ”he said.

The Plaza has another advantage for Camp. The New York Times
in 2005 famous characterized it’s the place where Wall Street analysts, hedge fund managers and institutional investors look for clues about the health of the retail economy. It is also a place where potential investors can assess the performance of a start-up retailer in a large suburban mall.

Wall Street analysts and hedge fund investors are no doubt familiar with Camp’s flagship store in New York City on Fifth Avenue, and its other stores in Manhattan and Brooklyn, but Garden State Plaza might be the place to help them. to decide if the Camp model is working well. sufficient for wider national expansion.