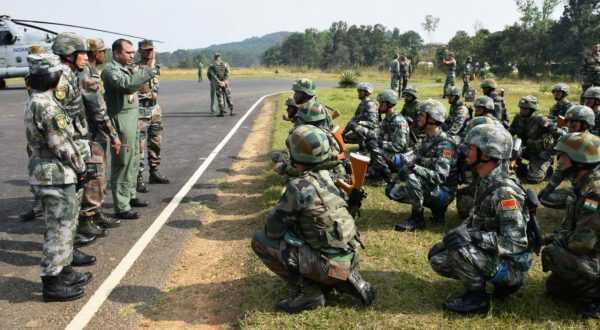 New Delhi: Defense force chiefs have unanimously described China as a tough challenge amid the two-and-a-half-year stalemate in eastern Ladakh.

The army chief admitted that the lesson of being ready at all times has been learned from eastern Ladakh, so there is a need to improve the infrastructure. The IAF chief warned to prepare for hybrid warfare, citing a dangerous neighborhood. Calling China a difficult challenge, the Navy chief also said that it has increased its presence not only at India’s land borders but also in the maritime domain.

General Pandey said the stalemate along the border in eastern Ladakh taught a high level of preparedness and improved infrastructure at all times. The Army Chief, in response to a question posed during the India Defense Conclave, clarified that Arunachal’s infrastructure along the northern border will also need to be improved.

General Pandey said that despite the withdrawal of PP-15 troops to Gogra-Hot Spring, there were still two blocking points, Depsang and Demchok. He said he was sure they would find a solution for those too. The army chief said the situation in Jammu and Kashmir is completely under control. He said there had been a significant increase in infrastructure, especially in eastern Ladakh over the past two years. He also talked about improving aviation infrastructure and said helipads are being built in forward areas for strategic and tactical airlift.

At the Indian Defense Conclave itself, the Indian Air Force chief said that neighboring countries do not have an ideal security environment, so the country should always be ready for hybrid warfare. . In the current situation, the country faces many threats, it is a big challenge to specialize in hybrid warfare, he said. He stressed that given the current political climate, it is important for the IAF to build capacity in traditional, sub-conventional and non-traditional areas. He said the enemies have increased their capabilities in many areas, which can be used against India, this does not necessarily happen in wartime, it can also happen in peacetime.

To meet new threats and challenges, technical excellence must be achieved over the enemy, he said. India is a responsible power but in the current situation there is a need to increase air force capability especially in conventional, unconventional and co-conventional fields, he said. , various platforms, sensors, weapons, networks are the most important internal research, development and production will need to be increased to improve future capabilities. He said that new technologies, platforms, weapons, systems and policies being worked on around the world can make existing technologies and weapons less useful, but also useless.

Similarly, at India’s Naval Revolution: Becoming an Ocean Power event held in the capital Delhi, Navy Chief Admiral R Hari Kumar described China as a difficult challenge and said that it had made its presence not only at the land borders of India but also in the maritime sector, however, the Indian Navy conducts regular surveillance in the Indian Ocean region. He also spoke about traditional and other security challenges for the country. He said Pakistan has continued to modernize its military despite economic constraints, especially its navy.

The Navy chief further said that these traditional military challenges persist all the time. At the same time, terrorism remains a major security threat. In such a situation, it is a great challenge to constantly adopt new strategies to stay one step ahead of these invisible enemies. He said the Indian Navy will be completely “AatmaNirbhar” by 2047, from the production of ships and submarines to spare parts and weapons. He said that the navy would be entirely indigenous, whether it’s ships, submarines, planes, unmanned systems or weapons, etc., that’s what the aim is.