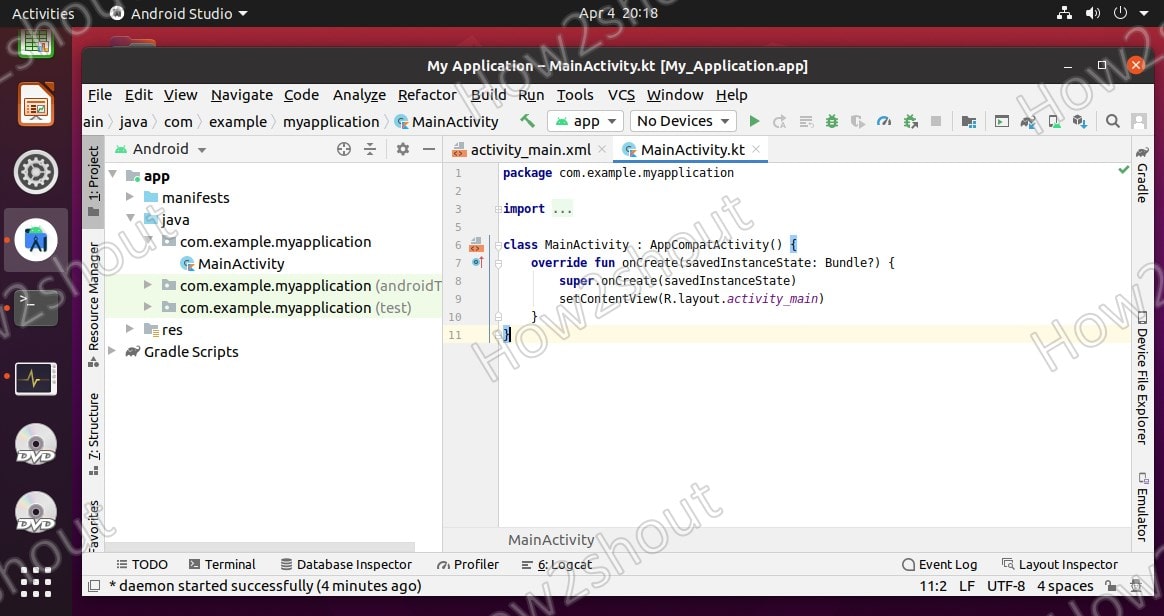 To create Android apps, developers can download a free official platform called â€œAndroid Studioâ€. It is based on IntelliJ IDEA, a complete development environment, bundles all the functions required to develop and debug applications. This gives developers an alternative to the Android SDK, which basically consists of Eclipse and the ADT plugin. It’s available to download and install for Windows 10/8/7, macOS, Linux, and ChromeOS.

Android Studio comes with the development environment that allows you to do the following:

Here we are using Ubuntu 20.04 LTS, however the steps will be the same for Ubuntu 21.04 / 18.04 including Linux Mint, Debian, MX Linux, Elementary OS and other similar derived Linux distributions.

Android Studio requires JDK for proper functioning. At the time of writing this tutorial, the latest version of Open JDK was available for direct installation using the official Ubuntu-OpenJDK-14 repository.

Once the installation is complete, check the version by typing: java -version

There are two ways to install Android Studio on Ubuntu 20.04 LTS: one uses the SNAP package manager and the other is to manually download the Android Studio package. However, since SNAP is disabled on Linux Mint, by default, we will therefore show both methods. Use whichever you think is appropriate.

To see– how to activate SNAP on Linux Mint

This is the easiest method to install this development platform on Linux. And at the time of writing this tutorial, the last version of Android Studio to install through Snapcraft was 4.1.3.0. It might be different in your case, however, the command to get it using SNAP will be the same.

Now for some reason you don’t want to use the SNAP package, then it is possible to get the Android Studio package to be installed on the Linux system directly from the official website. Here is the link, visit the page and download the latest IDE package available for Linux.

Before going any further, make sure that the following dependency packages are on your system …

Once you’ve downloaded the file, it’s time to unzip it. Follow the following commands:

After extracting the package and moving it to the local folder, let’s run the script to configure this Android app development and emulation platform.

If you already have a previous setup or installation folder, you can select it, otherwise leave the default option selected.

Although we can also set it later, if you want, do it here to set the default dark or light theme.

Once the installation is complete. You will see the Android Studio, Create a new project and give your project a name and you will be on the main screen of this app development platform.

Click on Tools and select Create an office entry ability to create a shortcut to easily access Android Studio from any application or desktop.

While running Studio from the command line, select Create a command line launcher. Once done, you will be able to start the platform by simply typing